The modern human presence on Macquarie Island is relatively small, averaging between 20 and 40 persons throughout the year. Generally scientists and researchers, all of the island’s human inhabitants live and operate from the Macquarie Island Meteorological Office run by the Australian Antarctic Division. However, the island has a more rich history of human interaction that might appropriately be identified as three unique periods:

Macquarie was discovered in 1810 by Captain Frederick Hasselborough who was exclusively concerned with the island’s large seal population and its potential use in the production of seal oil.[i] Though the island was generally considered unremarkable, and not suitable for human colonization its fauna created incentive for the oil industry. At one point during the island’s early years even penguins were utilized for oil—each penguin yielding approximately ½ liter of oil.[ii] The industrial commoditization of the extant wildlife decimated the local populations.

The Tasmanian government has provided an extensive resource on the history and impact of sealing and the use of penguins for oil here.

Concurrent with the industrial utilization of Macquarie Island, many scientists had begun to find interest in the island, specifically for its proximity to Antarctica and the prevailing weather systems that effected nations directly to the north. That interest eventually led to the creation of the islands first permanent meteorological station in 1911 by Australian Sir Douglas Mawson.[iii] The station was in operation only for 4 years. It was closed in 1915 after the complete loss of the aid ship Endeavour.[iv]

During their time on the island the observers also closely documented the remnants of the sealing community and the effects of the oil industry on the penguin population. Their observations of, and subsequent testimony against, eventually ended the use of Macquarie Island wildlife as a source of oil.[v]

In 1933 the Tasmanian government established the island as a wildlife sanctuary.[vi]

In March 1948 the Australian National Antarctic Research Expedition (ANARE) established the present research station on the island at Buckles Bay.[vii] The purpose of the station was to begin weather research operations in an effort to understand Antarctic weather systems that influence Australian weather. The Macquarie Island Meteorological Office has provided an uninterrupted stream of data from the time of its creation. 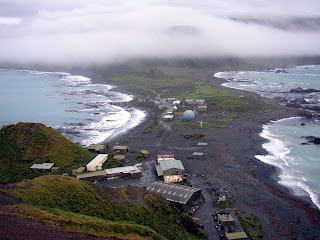 The Australian Antarctic Division, under a lease from the Tasmanian government, operates the modern research station.

To view a webcam of the island from the research station, click here.

Posted by Macquarie Island at 12:14 PM No comments:

Macquarie Island is located at latitude 54 38' 40" S. longitude 158 40' 50"E. It is an oceanic island located in the Southern Ocean. The island is 34 by 6 km lying about 1,500 km east of Tasmania and, also, is located halfway between the Australian and Antarctic Continents. It is a part of the Sub-Antarctic Islands which means that it lies South of the Polar Front and experiences cool temperate climate conditions.

The temperature varies from around 7 degrees celsius in the summer and 4 degrees celsius in the winter. Cloud cover is experienced often so very little sunlight has a chance to reach the ground. The island experiences some form of precipitation (rain, snow or hail) about 300 days out of the year. It is very windy because it lies within the zone of the West Wind Drift. Unlike other Antarctic islands, it is a plateau shaped from wave movement rather than ice collisions. The altitude reaches 433 meters at its highest point.

Extrusive volcanic rocks (mainly pillow lavas and basaltic dykes) make up 80% of the island crust. There is a central plateau about 300 meters above sea level that is the main topographic feature on the island. It is surrounded on all sides by steep cliffs and glacial drift up to 20 meters thick. There are actually quite a few lakes and smaller pools found on the plateau and the surrounding island terrain. An interesting fact about Macquarie Island is that it is the best preserved source of oceanic crust which was formed in deep waters and is now above sea level. The island is a part of an exposed ridge complex called the Macquarie Ridge. The Ridge interacts with the Indian-Australian and the Pacific plate creating tectonic movement and constant, but extremely slow, growth of the island. Because of this, Macquarie Island is an area where geoconservation is extremely important.